Just before the British elections, I had the opportunity to return to Northern Ireland, to Derry, and to talk to people involved in a wonderful Peace Project, the Derry Playhouse.

I met playwright, writer and poet Damian Gorman, who has written extensively for television, radio and the stage. He is currently preparing a project focusing on 1972, the worst year of the Troubles. He is working with a broad range of members of the public from all walks of life (and both sides of the community) to share their experience of ’72.

I also talked to Greta McTague, who participates in Damian’s writing workshops at the Playhouse, and works as a teacher in Derry. They both offered valuable insights on life in Derry in 2019, the threat of Brexit and the return of a hard border, and the divisions, but also signs of hope in Northern Ireland. 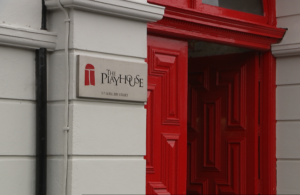 The Playhouse in Derry

History of the Northern Ireland Conflict 1968-1998 (quite in-depth)

tldr? Then try this summary by the BBC

Music credits: Jazzhar, “Room with a View” CC-BY-SA, check him out on Jamendo and on Free Music Archive